The lead up to the race was OK ‘ish’. The wife and I camped at the venue and due to a group of noisy Polish people partying all night we didn’t get much sleep. It didn’t affect me for the event but it was annoying. Especially as there was a good vibe at the camping area. Chatting with other competitors who were racing the next day. Comparing war stories on good and bad events of the past etc.

A really good, comfortable and confident swim. 270 swimmers for the mass start. I positioned well, stayed out of the fracas and was happy with my 38 mins and 58 seconds. All felt very good. No zig-zagging, good sighting. The time was the slower end of the scale but not too slow to worry about. 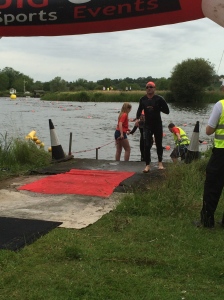 Quite flappy – 2 mins 21 secs – put on a cycle top, socks and cycling shoes, helmet and glasses. Socks took the time. Wetsuit came off in a flash.

Lap two I did in 1 hr 16 mins (ave speed 28.2) I think this was because I was in the aero position less often – probably less than 50%. Legs felt good and riding was OK, just shoulders and neck aching in this aggressive position.

Third (little lap) was an average speed of 27.6kmph. This was the slowest speed and was a harder lap as the cut through road was hillier. Less aero again as noticeably more traffic especially on the fast road back to Emberton Country Park so I wanted to cover the brakes etc.

Bike leg felt OK. At no point did I think I was going too hard or had to hold back as tired. Legs always felt fine – was more about being aero. This is not surprising as I am still getting used to riding on a TT bike. 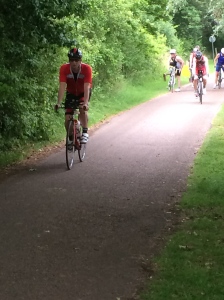 1 mins 51 secs – again flappy. Rack bike, helmet off, cycle top off, race chip off, calf guards on, timing chip back on, gels in calf guards, trainers on, hat on, Garmin strap on, Garmin computer off of bike and on to wrist and run.

Such a lot to do!

Lap 4 felt good mentally and hence physically, just this lap to finish and done, felt I could push the pace a bit, went past 4 or 5 other runners – a time of 33.08 but the last 2.5K K was at the pace I started. 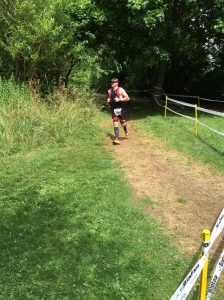 Vichy was my previous half distance PB at 6 hrs 15 mins – so a big improvement, mainly the run and shorter transitions (as local event not big event with large transitions to run through).

The run was a time of 2 hrs and 9 mins a new 70.3 run PB by 7 minutes. The run training of the winter and so far this year is paying off in a big way. 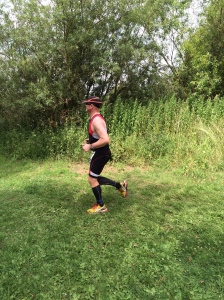 It was at the end of the race where I made my big mistake. Sam had packed the tent away while I was on the bike leg, so I got changed in the toilets, put the bike on the car grabbed a coffee and we left. We had said we would eat before leaving, but I had the brilliant idea of getting on the road and stopping at the services.

Traffic was good and the roads were clear so I decided to plough on home and eat at home rather than stop at the services. When we got home I then decided unloading the car and sorting out the camping gear was a better idea then eating so I didn’t really eat (other than a banana and an Oat bar) until almost 3 hours after the race.

Monday I felt like crap and Tuesday this blossomed into man flu and now I have Webola.

So training is on hold and my endurance training is trying to stay awake for more than 3 hours without a little snooze.

Remember people – always eat within an hour of exercise, and ideally in the first 20 minutes, not 3 hours later, after 6 hours of exercise.