It was not the best of starts to boot camp Albuquerque!

Lifting the suitcases on to the trolley at the airport I hurt my back. Neither of the two bags were heavy, both being weigh under the limit (see what I did there!)

But as I lifted one of the bags my lower back spasmed up. It felt better after a while, but it then followed with 3.5 hours sitting around at the airport (flight was delayed), 10 hours on the plane, 2 hours at the next airport and 90 minutes on the next plane. By the time we got to Bill and Val’s my back was wrecked.

I have been able to train. It’s better the more active I am. But after the exercise or when I have been sitting for a while, when I try to get out of a chair or stand up right, it hurts like hell.

I will give it a few more days, have a few more rubs from aunt Val and then get an adjustment and see if it does the trick.

But as I say I have been training. The first day’s first session was an easy ride. My trusty stead is shown below.

I rode a route I had done before – rode along the trail shared with runners, roller bladders, cyclists etc. I was going at quite a pace so at the end I left the trail and rode home on the road. I caught up with three others cyclists on road bikes, all kitted out with the best gear. As I passed them I could hear them chatting about being over taken by a ‘guy on an old mountain bike’. I had to stop at the next set of lights and they caught up with me and we got chatting.

They realized I was English and we chatted for a while as we all rode along together. In the end one of the guys said ‘so you’re English, cycling in the heat (75 degrees), at altitude you are not used to (7,000 ft), on an old mountain bike and you have just cruised past us like we were standing still – so what’s your story bud?’

I said I was visiting family and taking the opportunity to train for my next Ironman. ‘Oh I see he said, well that explains it!” He told me I need to get the Iron dot tattoo so others know not to try and keep up. Which felt good.

So that was my first session – an easy 70 minute ride to check out the bike with a short run off the bike. After a shower we then went for a 90 minute walk and then we went shopping – another 2 hours on my feet walking the mall. I can’t complain though as I bought more stuff then the wife and her aunt put together.

Today’s run was tough going. The altitude does have an effect and everything is a pace down. I cannot run at my usual 10K pace as easy, the effort to get to my half marathon pace is the same effort I usually put in to get to my 10K pace.

This afternoons bike ride, with efforts, was good though. I found this road which was a gradual 2.5K climb that took about 10 minutes. So I rode up that for 10 minutes, at the top I went left, rode for another 10 minutes, turned around and rode back and down the hill again. Four sets of that and I earnt the Beef Burrito I just put away. 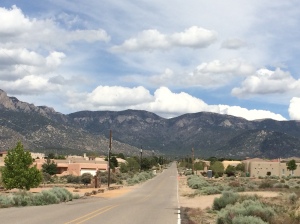 Tomorrow is a 3 hour bike ride with a 15 minute run off the bike and then Hot Yoga. Hopefully that will help my back. Well that’s the plan.