The Ball Buster has been a curse of mine. I entered it last year and had to withdraw due to illness. I had it pencilled in for Autumn of this year, but I wasn’t fit enough so I didn’t enter. So this was third time lucky. It wasn’t good that I had had a cold and hadn’t trained for the three weeks leading up to the event, but withdrawing again, wasn’t an option.

I did wonder if I was doing the right thing as I was setting up in transition at 7am in the rain, putting my kit into carrier bags to try and keep it dry etc.

After a chilly (and thankfully short) race briefing and a sing song of happy birthday to the Ball Buster (it was the 25th anniversary) we were off.

The first run was really nice. The rain had stopped. I got into a nice pace, all on feel, there were a couple of glances at the Garmin, but just to see where I was at, rather than to dictate pace. A very comfortable run, I felt I could have gone faster but was holding back – it was going to be a long morning as it was, no need to ‘blow my doors off’ too soon.

The run up Box Hill (at the end of each 8 mile loop) was comfortable. Sam and Clare, the support crew, had walked part way down the hill so I got cheered on before I was expecting it – which was nice.

Run 1 in a time of 1 hour 12 mins. My target time was 1 hr 15 mins so slightly faster but it was comfortable, so happy with that.

Transition was quite fast (for me). Just over 2 mins. I changed my top, put on a Gilet (as it looked like rain again) and put on some thick wolly gloves. And off I went.

Lap 1 was good. Felt good going on to the bike after the run. No real issues. All good.

Lap 2 it rained. A lot. Having glasses on meant it was hard to see and they kept misting up, the gloves weren’t cycling gloves and I didn’t feel comfortable using them to brake (fingers slipping off the brake lever), so braking was not ideal, the roads were soaked, the descents were a bit dodgy, especially the tight corners on the descents.

Lap 3 it was still raining but not as much. A lot of the faster participants were starting the run so there were now runners in the road and cyclists and cars. I felt good, I wasn’t tiring at all, but this lap was slower due to traffic. Car drivers were being very courteous and driving slowly behind the runners (who were running in the road) until it was safe to overtake, but I was stuck behind the cars on my bike. It was a bit frustrating but it wasn’t the end of the world.

I finished the bike leg strong. I think I went up the hill as hard and fast on lap 3 as I did on lap 1. Any over taking I did on the bike was done gong up the hill, either others in the race or Sunday riders riding the hill.

Cheers from the support team as I hit T2

T2 was slower, a long(ish) run to transition after dismounting the bike in my cycling shoes across the muddy and wet car park. I also decided to change socks and put dry ones on for the run as my trainers were dry. Might as well do the last leg in comfort, but I was more worried about getting blisters.

Within a few steps I knew this was going to be hard!

My legs were screaming. They hurt all over. This wasn’t a bike to run issue, this was an use of riding hard up hill (lap 3 of the bike up Box Hill) then running with bike shoes on, then running (slightly up hill to start) with trainers on.

I changed my cadence a bit and tweaked my running gait and it helped the pain and I just stuck with that style. The rain had stopped and I felt OK. A couple of runners went past me. Saying hello and geeing me on as they passed.

The uphill parts of the run were hard, too hard for the distance I had done and how much there was left to do. The down hills were painful with pain shooting up my thighs every time my foot hit the floor as I tried to slow myself down on the descents.

I walked up a couple of the really hilly sections, no one came past me so those behind must have been walking too. I started running again and passed one of the runners, who had passed me earlier (he was now walking) and I had the other runner in my sights as I got to the bottom of Box Hill. But as I hit the hill and the incline started, my right calf just spasmed and basically seized up. 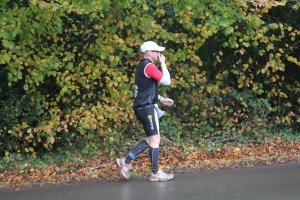 I got to the last corner before the finish and thought I can’t walk through the finish line so I started running again and then the left calf cramped up and spasmed leading to a massive shooting pain in my calf, which stopped me in my tracks, allowing someone to pass me. So it was a limp and grimace over the finish line, but at least it was over the finish line.

So a total time of 4 hrs and 31 mins to complete the Ball Buster, one of the UK’s toughest endurance events.

My target time was 4 hours 15 mins so I should be disappointed but:

The 4 hours 15 target time I think would be hard if I had trained up to the event and was fighting fit, so 15 mins slower, which at least 5 mins of that was due to the rain on the bike leg, means I am pleased with the finish time.

Mark was competing too (having raced the first ever Ball Buster 25 years ago he was the ‘celebrity’ having interviews and pictures with the organisers). It was good to get a picture with him at the finish. Clare and Sam also did a brilliant job as supporters (especially in the rain). And the fact Mark and Clare had stayed at our house the evening before and stayed around until the evening meant we got to share more of their company and had a right good laugh all weekend.

Over the past two days since the event my legs have completely seized up. Walking is hard, going up and down stairs is hilarious as I look like an 80 year old. The longer I sit, the harder it is to get up and move about. So the effort was certainly put in for the event.