Training is going from strength to strength at the moment.

Off the back of a full week of training (over 7 hours in total) including an 85 minute run session on Saturday (which in itself included 30 minutes of hill reps), Sunday I took part in the ‘SRS Brighton to Brighton Cycle Sportive’.

172K of cycling including three big hills (the last one being Devils Dyke after 165K) as part of a training week, was a big ask of these old legs.

It could not have been a better day. Firstly the weather was gorgeous. I know as a hardened ‘all weather’ athlete this should not have been a consideration, but having got to registration early, registered and sitting on the beach drink my coffee – this was the view.

The game plan was simple. Have fun. It wasn’t ‘an event’, it was a training ride. There was no time to beat (yeah there was, there always is – it was 7 hours) – just treat it as a nice group ride.

Kitted out and ready to go – 8.30 am and the start was there before I knew it.

We left in groups of 20, every three minutes. I was in the second group of 20. We rode for about 5K together then about 5 dropped off the back, 5 shot off in front, but by then we had caught the 5 that dropped off the first group and the fast 5 from the third group were with us.

So in short for about 30K we all rode along like a massive peloton, around 30 – 40 of us as we rode out of Brighton. The route was very flat, very easy and therefore very fast. I positioned myself quite near the back, to get the maximum draft, so I decided to take my turn up the front so I went to the lead and headed the pack for about 15 – 20 minutes. After a good turn at the front I looked around and there were only 6 of us left!

Me and two others played the game and took turns at the front, the other three (soon becoming 2) hogged our back wheels and enjoyed a free draft.

The 6 became 2 and me and this other guy (no I didn’t ask his name!) rode together to the mandatory feed stop at 90K. The feed stop was just after the first hard hill. We caught a couple of others on this hill – it was a hard climb but after 85K of flat it was a nice change! The four of us then rolled into the feed station together.

A pee, top up of drink bottles and some food and after 10 mins we were off. The first 90K was done in 3 hours 15 mins ride time. A lot of other riders where coming into the feed stop as we left, so I knew it was a matter of time before the stronger riders caught us.

But we held our own and never saw them again. We rode for about 30K – 40K together, taking it in turns on the front, chatting away like a pair of old dears. He had done the London to Paris a few weeks earlier, I was chatting about IM Austria.

We then hit hill number 2. A short sharp hard one, the type I don’t like. I put my head down and climbed. I caught a rider half way up and pushed to catch a second rider before the summit (Froome vs Contidor in the Vuelta was in my head!)

I reached the summit, cycled out the fatigue and looked back but no one was there, the two riders were still climbing and my buddy was nowhere in sight. So I just cycled the rest on my own. I caught and passed a few other riders, a few caught and went past me.

All was good and then I hit Devils Dyke. I had never cycled Devils Dyke before. I didn’t know what to expect. My buddy had told me it was longer than Ditchlin Beacon and had a nasty kick at the end.

Personally I would say it’s shorter than Ditchlin – but that might be that it’s just more my type of hill, the long and graduals where you grind away rather than the shorter sharper ones where you don’t know whether to sit or stand.

So I ‘flew’ up the easy(er) part no problem and then turned to the right and hit the short sharp part which was bloody hard. But doable (where there’s a will, there’s a way).

Once on top of the hill it was a nice, fast, drop down into Brighton and into traffic, traffic lights, cars and irritated drivers.

I hit the finish in 6 hours 46 mins. Which was 15 mins under the time I was after and almost an hour inside the Gold standard. 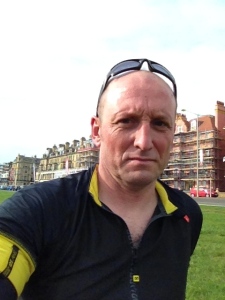 I was well happy with that. Nice weather, nice company, nice roads – but more importantly a very strong and well paced ride. Nutrition was almost perfect (I could have done with an extra gel) and could have done with another drinks stop as it was a hot day. But I took the gamble knowing it was a gamble, to do with out and plough on to the finish and it paid off.

The finish time put me 35th out of 141 finishers – so on that basis I am more than happy.

It is all starting to come together.

I have had a good chat with Ironmate Mark (my coach) earlier this evening as well and lined up training for this week and next week leading up to Boot camp Egypt 11th – 18th October as training for the Ball Buster – the next big event.