The early morning start (up at 4.30am) meant it was chilly enough to keep the sponsors happy kitted out in Ironmate and Tri Topia gear.

The weather was good. Not hot or sunny but not cold either just overcast. But I knew if, or more like when, the Sun came out it would impact the race.

The lake temp was taken and to surprise us all the Middle distance race was deemed ‘wetsuit optional’. The other, two shorter races were non wetsuit still. So we were all kitted out in wetsuit except those who had regrettably gambled the other way and not bought their wetsuits with them. 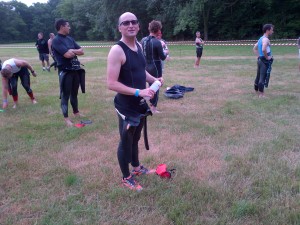 My swim wave started at 7.30 am. I was ready way in advance and keen to get going, especially as it was a wetsuit swim. The klaxon went and off we went. My swim was excellent (if I do say so myself). Very strong, well paced, good sighting. The only downside was the lake was full of weeds, but that was the same for everyone. I had loads of clear water due to good positioning at the start. I tried to draft but as I caught people they would slow me down if I drafted so I opted to plough on.

T1 was long(ish) as I opted to put socks on mainly for the run but I thought it’s either T1 or T2 that is slowed due to the time to put socks on and if T1 I have the comfort of them on while on the bike. I also put on a cycling top, mainly to keep the Sun off my shoulders for when the Sun came out.

Then off on to the bike leg. The first lap was good. I felt a bit tired/flat on the first lap. Getting to Leith Hill, the massive climb, seemed to take an age and Leith Hill itself was a hard hard effort. Hardly surprising as it’s the highest point in Southern England.

After the summit of Leith Hill it’s a fast decent and generally fast roads back to the Vachery Estate or in our case Lap 2!

I did lap 1 in 1 hr 29 mins. But it was a hard lap, so I decided to knock off the pace a bit and take lap 2 a bit easier. Leith Hill was so hard I was worried I wouldn’t get up it the second time if I went hard on the way to it.

So lap 2 I eased up, did Leith Hill again (which was a bit easier the second time) so taking the lap easier would have been a good plan until I looked at the Garmin and saw Lap 2 took 1 hrs 32 mins. Slower yes but 3 mins slower over 40K wasn’t as slow as I thought.

I noticed the sun was out (Sam later told me the Sun came out during the second lap on the bike, but I guess with all the fast roads I hadn’t noticed.

The run was 5K out and 5K back twice, the out had a gradient on it so it was harder going out then coming back. The course wasn’t ideal either. Running about 2K on very uneven fields, with tractor tracks and long grass, then a track with pot holes for another 1K before you got out of the estate and on to country lanes. There was a feed/water station as you left transition which I rejected as I was ‘full’ after the bike and the briefing said there was feed stations every 3K, but the next water/feed station was about 4K away. I got to the first turn around point in 31 mins 30 secs, and that’ where the trouble started.

The lap back was hard, but as it was down hill it was easier then going out, so it masked the effort I was putting in. I hit the feed station, two cups of energy drink, two cups of water and a gel. I consumed the energy drink and gel and threw the water over me. And off I went.

I got to the end of lap one which is 30 metres from the finish line and had to turn and go through the hell again. And it was hell. I don’t actually know how I got through it and finished. A marshall appeared on his bike and asked how many laps I had done, I said two thinking I had missed the cut off or something and my effort was in vain, but he said Ok, he’s checking as a lot hadn’t started their second lap yet, while I was on my way back to the finish. This perked me up a bit.

I did the last lap with a sponge soaked in water down my back and another down the front of my top. The feed station was two cups of energy drink, two cups of water AND two cups on the sponges so the water trickled down me as I ran. During the run I had 4 gels and about 10 full cups of either water or energy drink. I won’t bang on about how had the run was – I will just say ‘it was hell’.

In terms of run time, my PB for a fresh half marathon (not before a 1.9K swim and 80K bike) is 2hrs 1 min. I was aiming for 2 hours 10 or 2 hrs 15 mins, those times went out of the window when the sun came out. I just wanted to better my previous half marathon off of a half ironman of 2 hr 20 mins. But the legs said NO. I finally finished the run in a time of 2 hrs 23 mins.

As I was running I was thinking about having to pack the tent away and load the car etc in the Sun after the run, so one of the highlights of the weekend has to be when Sam told me she had packed everything away and loaded the car while I was on the bike – What a babe!