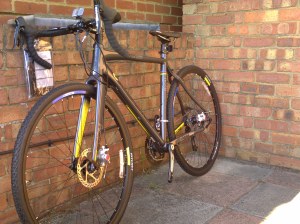 I have started  to fall behind on blogs again, but just the blogs not the training. Training has been going well, very well, great guns, brilliantly etc.

Last week I did 8 hrs 10 mins volume of training. This was good but better still was some of the sessions I did. One being a 60 mins turbo followed by a 20 minute run, straight into another 40 mins turbo followed by a 10 min run, straight into another turbo 20 minutes with a 5 minute run to round off. Two hours thirty five minutes of brick training – very tough but also enjoyable.

All run sessions are featuring pacing work with runs split into different pacing within the run. Makes the session go quick and keeps me focussed.

This week has also been awesome. The mid week sessions have been good, a run and a turbo brick session on Monday evening, a turbo with intervals on Tuesday and then there was Wednesday. A one hour run including a 25 minute run at 5K pace. I warmed up as needed, did the pre set and then hit the timer and increased the pace up to my 5K pace. I felt good, it felt … well not easy but comfortable. I kept the pace and then increased it a bit and then a bit more. I hit the timer again (to stop it) as I reached 5K distance on the Garmin. 23 mins 56 seconds. A new PB. A sub 24 mins. During training. Where is all this coming from? A run session in the midst of a heavy (ish) week and another run PB distance smashed (previous PB being 24 mins 30 secs)!

I finished the run session off with the broadest grin on my face. It was literally ear to ear.

The rest of the week was good too. A big swim session Thursday. I switched Saturday’s and Sunday’s sessions so yesterday was a 2 hour bike ride and a 15 mins run off the bike all very easy and today one hour Core and a run with 5K intervals. This week has been just under 10 hours training – 9 hrs 55 mins to be exact.

I have another run scheduled for tomorrow but I am going to play it by ear and speak to Mark as Tuesday we fly to Egypt for a 5 days break. Bit of a holiday but also a bit of business to do out there. So I will be trying to get away from work at a reasonable time, packing and preparing and trying to fit in a 60 mins run might be tough. Also getting up at 5am the next day to spend 5 hours on a plane I don’t want to fly if I am too knackered.

It’s really exciting to be going on the trip as we will be staying in our apartment for the first time which is finally finished and furnished (we hope! – that’s why we are going to check all is OK). So there will be quite a bit of running around to do in the five days but I am sure I will be fitting in some runs, swimming and cycling because …. I bought a bike bag to take my bike on the plane.

I rode it yesterday just to make sure it was all OK. And it was – it’s like riding on air, it just soaks up the bumps (well massive pot holes).

So all is going well.