Today I did my first open water swim for ages. Month’s and months.

And it could not have been in a more beautiful place as Cochiti Lake. 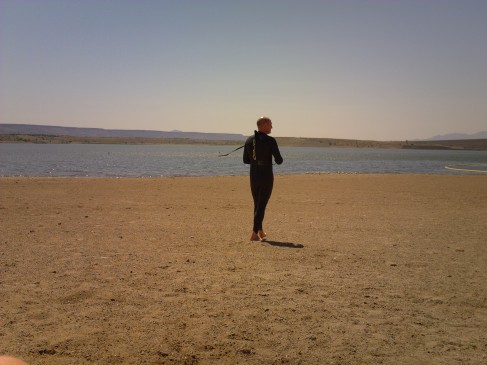 The water was warm and fairly clear. The lake was free to swim in and there were only a handful of people there including us.

I did a 45 min swim – nice and easy – completed circa 1.9K. The distance I need to swim for the half ironman. Mainly practised my breathing and my sighting, which was hard as the bouys were small and infrequent. There was also a strong current towards the end as the wind got up and created a bit of a chop on the water.

But a very enjoyable workout, those ones which are almost not like a work out.

This afternoon I followed up with a 1hr 10 minute bike ride. Went with a guy called Steve, the neighbour of my wife’s aunt and he showed me some nice routes. Quite hilly as we headed up to the foothlls of Sandia Peak, but they were failry easy to go up and the route had several flats after each climb. Arranged to go with him again on another ride or two while I am here.

Tomorrow is a long run of 90 mins and another bike ride. Can’t wait.

One thought on “Cochiti Lake”